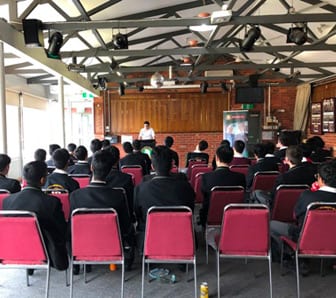 MHSOBA prides itself on its ability to connect current students with its incredible Old Boys network.

Throughout 2018, a number of lunchtime seminars will be held in the Unicorn Club that are intended to provide current VCE students with a glimpse into life as a tertiary student in specific fields of study.

The first Student Luncheon Seminar, held on May 22nd, featured Tony Xie. Tony graduated in 2016 and, although his initial intention was to pursue an arts degree overseas, he found himself more and more interested in economics throughout his final year at Melbourne High School. Tony is currently studying Commerce at Melbourne University and was able to give those in attendance a terrific insight into the challenges and surprises that he has encountered in his first 18 months as a uni student.

The second Student Luncheon Seminar was held on June 22nd with Ali Zarghami (MHS exit 2016) discussing his journey from Melbourne High School graduate to medical student at Monash University. Ali, currently in his second year at Monash and the recipient of the prestigious John Gandel Scholarship in 2017, chatted to his captivated audience about the way he went about preparing for the opportunity to study medicine and the realities of life as a medical student.With a number of luncheons scheduled for the second half of the school year, students are encouraged to follow MHSOBA’s social media channels for updates.