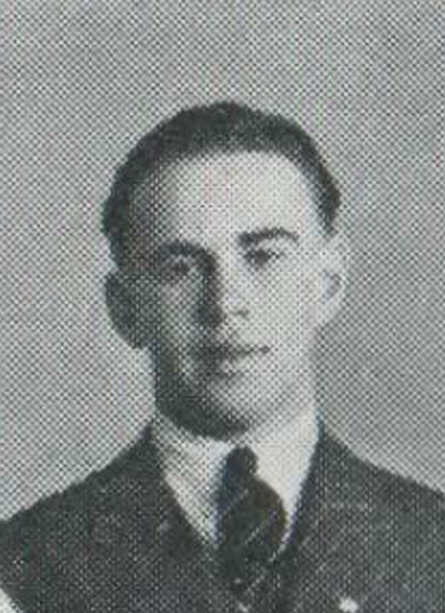 Known as Alf, he transferred from Kew East Central School and in his first year at MHS was already noted for his sporting prowess, as well being Form Captain. The following year in Fourth Form, he was in the 1st XVIII and the school athletics team, with House Colours (Waterloo) in both, as well as being on the Magazine Committee.

Alf was the Senior Long Jump winner at the House Athletics (though only 17) and went on to be Long Jump Champion at the Combined High School Championships. The next year, when in Fifth Form, he was elected House Captain, was in the House Tennis, Football, Baseball and Athletics Teams (for which he received Colours for each). A versatile athlete, he won both the 100 yards and the 440 yards for Waterloo and was the school’s Open Athletics Champion. In School teams, he was in the Swimming Team and Captain of the Athletics Team and Vice-Captain of the 1st XVIII.

Alf entered the Royal Australian Navy on 16 December 1942, less than 4 months after his 18th birthday. Initially an ordinary Seaman, he was promoted to Mid-shipman (temp) in July 1943 and to Sub Lieutenant (acting) in February 1944. He served on the Fairmile Motor Launches (ML824, 825 & 821) based in Sydney and then Fremantle. He final sea posting was 11 months on GVP962 as Lieutenant in 1946, before he was demobilised in 1947.

After the war, Alf went to University to complete his Bachelor of Commerce and then joined Stockbrokers Wm. Noall & Son in 1951, he was elected a member of the Stock Exchange, and a Partner of Noall in 1960.

Alf’s involvement with the Melbourne High School Old Boys’ Association started in 1940 when he joined the Athletics Club and the Football Club. His association with the Football Club was a long one, elected Life Member in 1962 and President in 1964-1967, he coached the Under 19’s in the early 1970’s. For 10 years he was the MHSOBFC delegate to the VAFA with time on the Selection Committee, the Umpiring Committee, including Chairman in 1976. He was subsequently elected a Life Member of the VAFA.

In 1957 he also joined the Council of the MHSOBA, was Vice-President for many years and was elected President in 1965. Always a welcoming affable man, his phone number was listed in the Old Boys newsletter with an open invite to call him and ask about the next council meeting. Alf was a constant presence at many old boys’ functions over the years.