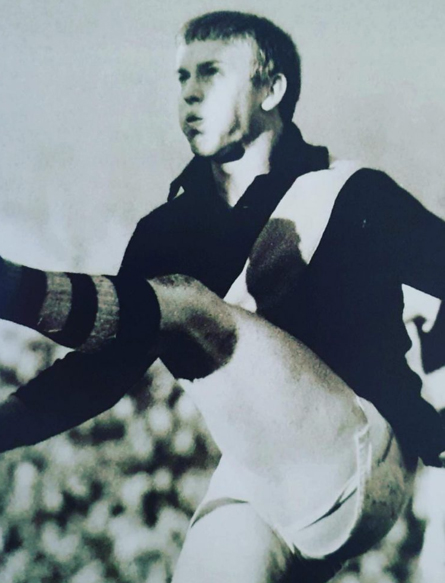 Blair played as a rover and forward-pocket with the Tigers after working his way up from the Under/19s. He was a fine exponent of the banana or check side kick. In 1965 he won the VFL Under/19 Grade Goal Kicking award. He started his senior VFL career in fine style when he kicked the winning goal in his debut game against South Melbourne in Round 17 of 1966, at the Lake Oval. He then missed the entire 1967 season with a knee injury, after finishing 1966 as best player in the Reserves’ Premiership side. He returned to the seniors in 1968 before crossing to Melbourne in 1969. He kicked 5 goals for the Richmond Seniors against Carlton in Round 13 of 1968.

He was also a fine cricketer whose main expertise was as a left arm wrist spinner. He represented the Prahran Cricket Club in Melbourne and batting 113 times, he scored 1677 runs with 8 x 50’s and a highest score of 84. He also took 246 wickets with one hat-trick. He played first-class cricket with Victoria and Tasmania playing a total of 19 first-class games between 1969 and 1980, scoring 312 runs and taking 36 wickets. His highest score was 52 not out for Tasmania against South Australia and his best bowling was 5 for 52 for Victoria against Queensland. He was a member of Victoria’s Sheffield Shield Champion side of 1969-70. Blair was also a member of the Sale-Maffra team which won the 1992 Country Week, Cricket Final. He was also a cricket writer with the Age and Herald newspapers.