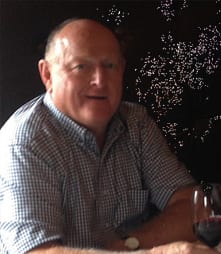 Don attended MHS from 1961-1963. He really enjoyed his time playing 1st 18 Australian Rules football for 3 years and captain of football during his final year. He was a school prefect in his final year as well.

He has attended many reunions and enjoyed talking with many students of his time! His blazer is still hanging in the wardrobe! Don became a teacher and a Primary School Principal. He was very involved with School Sport Victoria mainly Under 13 Australian Rules State Football. He played a few games with South Melbourne before moving to the country playing for Murtoa then Terang in the Hamden League where he represented the league and won a League Best and Fairest. His football playing finished at Eltham in the Diamond Valley League and he chaired the league tribunal for a few years after.

Don passed away suddenly and unexpectedly at home on November 11th 2018 at almost 11am. Sadly missed by family and friends!

Better known as Don or Donnie…

After completing his secondary schooling at his beloved Melbourne High School in 1963, Don became a student at Toorak Teachers College for his tertiary education for two years 1964/1965 and graduated with his Primary Teacher Certificate.

While at College he played football with Port Melbourne in 1964.  In 1965 Bob Skilton noticed he was playing very well and encouraged him to go to South Melbourne (now Sydney Swans) and train with them.  He played in the Reserves and played about six games in the Firsts.

His first teaching position in 1966 was a small country rural school near Murtoa in the Wimmera.  A footballer who was playing at Murtoa (John Sudholz) was swapped to South Melbourne for Don who joined the Murtoa Football Club for 1966.

Don and Jan were married in 1967.  His close friend Ian Rice, also a Melbourne High Old Boy, was best man at their wedding.  Sadly Ian died a few years later!  He was Principal of a private primary school and was a Prefect with Don at MHS, possibly School Captain?

At the beginning of 1970 Don and Jan moved to Northeast Victoria where Don taught at Bullioh Primary School, a rural school with a residence.  He was the only teacher there and loved his time with these great children and supportive community.

From 1970 – 1972 he became captain / coach of a small rural team in the Tallangatta Valley called Bullioh in the Tallangatta Football League.  Don’s two sons Tim and Simon were born during this time.  In 1972 our little family moved back to Eltham.  In 1973 he was realising his teaching career was more important so he reluctantly retired from football and became the basketball referee at Eltham Wild Cats where both his boys played basketball.

He taught at quite a few schools around Melbourne, and he finished his career as Principal of Greenhills Primary School in Greensborough in 2000.

At Greenhills Don became very involved with School Sport Victoria.  He was associated with many sports but as a football was his great love he became very busy with helping select, coach and manage the “12 years and under boys” from all over Victoria to form the State team.  The Victorian team played in the Australian Championships against other states in many venues each year.

After retiring from teaching, Don continued assisting with the football boys (which he loved) every year.  He was involved from 32 years and the Victorian team was always very successful.

He played lots of golf, worked casually at Camberwell Electrics and enjoyed quite a few overseas trips.  He really loved his three grandsons!

Unfortunately, Don suddenly and unexpectedly died at home at 11:00am on the 11 November 2018 aged 73 years.

School Sport Victoria have created “The Don Stanley Leadership & Inspiration Award Medal” which is presented by a Stanley family member to the Vice Captain of the “12 Year Boys” AFL state football team every year.  He would have been so proud that this year the venue for the presentation was in The Unicorn Club at MHS.