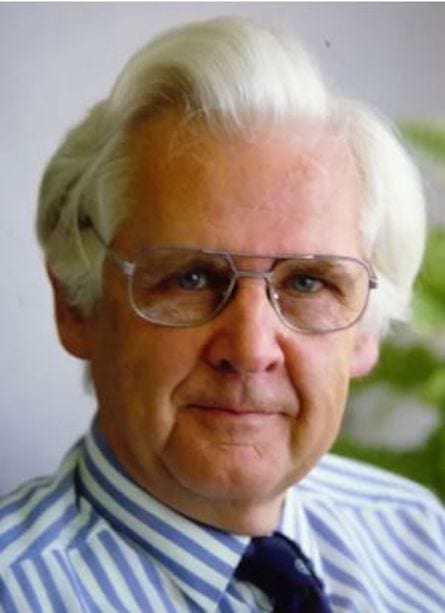 ‘We lived a very rich life’

Doctor Donald Sinclair, OAM, was one of Victoria’s foremost educators, a prodigious textbook author, an Antarctic tourism pioneer and a globe-trotting geographer and humanitarian. His strongest childhood memory was the dropping of the atomic bomb on Japan and little did he know that 40 years later the British observer to the Nagasaki blast would be having tea and biscuits at the family dining table in suburban Melbourne.

Donald Arthur Sinclair was born at Jessie McPherson hospital in Melbourne, the first child of Noel and Isabel. His father was a structural draftsman, responsible for the design of the circular forecourt shelters that adorned Mobil petrol stations in the ’70s. Isabel was a haberdashery store proprietor. They lived in McKinnon, Williamstown, country Victoria and Maryborough, Queensland.

Don was largely unimpressed with his early education until he won selective entry to Melbourne Boys High School. Over the ensuing 40 years he obtained a master’s degree from the University of Alberta and a doctorate in educational administration and practice from La Trobe University. He was determined to engender change for the better in his career as a newly qualified high school teacher.

He developed innovative practices well ahead of their time. The “Train of Knowledge” was his co-ordination of the air force, service organisations of the Country Women’s Association, Lions Club and the Victorian Railways. He chartered trains to travel the extensive Victorian country network with the aim for students to understand rural industry, geography, trade and transport integration. He produced daily newspapers and study guides ready for student topic immersion. Student-led banking was another practical initiative to bring reality of potentially dull business principles to life.

Don could see a need for more interesting books in commerce subjects. His response to this was to begin writing texts on basic business principles and mercantile law. His works were well received and went to multiple reprints.

His teaching placements steered him to geography, again the textbooks were less than inspiring, so of course he had new topics to write about. His publisher told him that he had become Australia’s most prolific textbook author with From Sea to Summit. The geography textbooks required extensive indexing, so his librarian wife Dawn was enlisted to fulfil that role, by default she also became a best-selling author. An unfortunate side-effect to this literary success was that his young son, Andrew, was also expected to know the answers to any question his teachers would ask, “your dad wrote the book, so you must know the answer”.

The ever-expanding geography books required extensive travel and research, at least 16 passports were filled in journeys to far-flung outposts. One additional passport has been lost forever, he ripped it into pieces and flushed it down the Israeli sewerage system when he found himself caught in the Six-Day War and felt having to explain two passports in his possession may have been somewhat problematic.

During the 1970s, Don developed the idea of chartering an aircraft to overfly the Antarctic for a day trip with an overriding educational purpose.

He organised a group of teachers to travel, spoke with Qantas and the idea suddenly had wings. A somewhat more prominent Australian based in Sydney had a similar idea, but wanted to achieve publicity for his business. Don started his flights from Melbourne and donated every cent of profit to disadvantaged Victorian school children. Meanwhile, the businessman flew from Sydney to the Antarctic and subsequently sold his underlying business for tens of millions.

In the years between textbook writing, Don moved from classroom teaching to becoming a government schools inspector. This took him to schools across Victoria reviewing their student and staff operations and providing recommendations for improvement. One can only imagine the advice he gave to the principal who said to collected students: “There is too much free intercourse between senior students in the corridor, it has to stop!”

His educational talents were noticed by others, he was offered a teacher exchange to England followed shortly after by secondment to the Victoria Police to help in educating police cadets to the required standard of educational proficiency.

He integrated well into the police and by default became associated with junior officers who subsequently became leaders in the various divisions of Victoria Police in later years. This symbiotic relationship has subsequently served Australian school students well.

He attended post-mortem examinations, serious incidents and followed investigations closely, he developed an interest in law, business and legal studies. In conjunction with like-minded educators, a need for legal studies to be offered as a subject to senior students was recognised. With typical energy, he joined a group of teachers, who developed a syllabus, set the exams, and a new offering for years 11 and 12 was born. He also co-authored the seminal textbook for the new subject.

During his career he met many leading figures in various disciplines. Perhaps the most significant meeting was with (at the time) Group Captain Leonard Cheshire in the 1960s that would subsequently lead to Don’s 50-plus-year involvement in the humanitarian organisation of Ryder Cheshire.

Cheshire was a British World War II hero, who flew more than 100 bombing missions over occupied Europe, pioneered low-level bombing techniques, was at one stage the leader of 617 Squadron (the Dam Busters of bouncing bomb fame) and he also happened to be prime minister Clement Attlee’s personal observer over Nagasaki as the Atomic bomb was dropped.

He was also seated at Don and Dawn’s suburban dinner table in 1989. The telephone rang, Don’s son excused himself from the table to answer the telephone while Leonard enjoyed the meal and kept chatting with Dawn and Don. Even Don was speechless when Leonard went to take the call from Bill Hayden, the governor-general of Australia. The vice-regal Rolls-Royce appeared in Don’s driveway about 30 minutes later.

Don took early retirement from his final position in the Victorian Education Department as chairman of the Appointments Board and moved to his next endeavours, establishing the Siemens Science Experience (now ConocoPhillips Science Experience) across 35 universities in Australia and model adopted by NZ which has encouraged tens of thousands of high school students to pursue a career in science, technology and engineering, and a 20-plus-year association with the American Elder Hostel organisation providing inbound tours for Americans visiting Australia and outbound tours for Australians to a myriad of destinations including remote Arctic villages, many Anzac Day pilgrimages to Gallipoli and 14 times to Machu Picchu.

Don wrote of his early years “my family may not have been wealthy, but we lived a very rich life in the sense of values that mattered and the importance of community and service to others”.

He took these words to heart and lived his life in service to the community. Life member of Apex, treasurer of the Society for Australian-German Student Exchange, life member of various teaching associations, chairman of council at PLC Melbourne and a 50-year association with Ryder Cheshire as treasurer, chair and president at varying times.

He has overseen the establishment of homes throughout Australia for families with serious illness, he has been deeply involved in care of lepers and disabled children in India, he has brought a young girl from Timor-Leste to Australia for open-heart surgery, and he has contributed to solar power systems in Timor-Leste. He provided inspiration and guidance to many. His legacy of good works will forever remain as testimony of his mum’s advice to “always do the right thing”.

Don is survived by his children, Andrew and Sarah, four grandchildren, his brother Ralph and sister Isabel. Dawn pre-deceased Donald by three months.