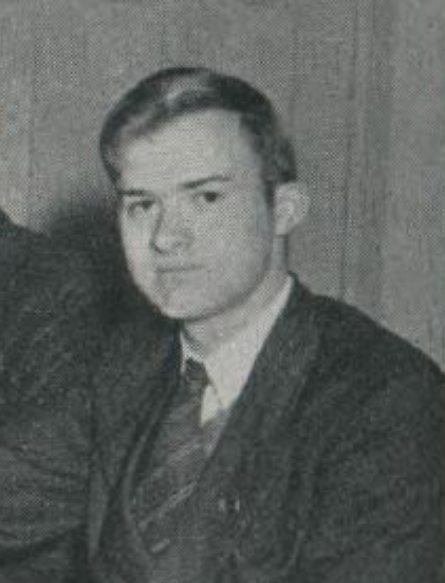 Brian attended MHS from 1948-1952 – at the school he was active in drama. He was President of the Drama Club, acted in plays, produced them, was a poet, a painter and  served on the Unicorn committee. He then completed a BA and Dip. Ed at The University of Melbourne, where he became well known as an actor,  producer and designer for plays with both the Melbourne University Dramatic Club as well as the Marlowe Society. He was engaged in drama when the Union Repertory Company was being formed, and performed along with many actors who became well known professionals and some on the London stage. He even entertained Laurence Olivier when Olivier visited Melbourne. He also knew Noel Coward.

After a brief stint teaching in Gippsland he came to Melbourne High School in 1960 where he stayed for 30 years years and became a legendary teacher. He was mainly a teacher of English – he was an inspired educator. He was a key figure in the production of top class plays, musicals and operas. He usually combined with David Niven and also the music teacher, notably Bruce Worland and these three did some of the best productions in the school’s history.

Some of the following were undertaken with The Mac.Robertson Girls’ High School.

In 1960 they produced the play The Importance of Being Ernest,

1968 Patience  which won the best amateur production of the year.

1970 Orpheus in the Underworld (with a full orchestra)

From 1979 David Niven and Brian also managed to stage a play annually as well as a musical. They did Shakespeare plays between 1979 and 1986 with Front Page being a change from Shakespeare in 1986.

The cast of many of these productions was highly talented and some such as Leigh Bowery and John Deidrich went on to successful professional careers.

He and David Niven were able to expand considerably the drama facilities, equipment, and dressing rooms considerably and developed among the students skilled stage crews.

Brian had a great sense of humour too and helped stage two revues by the staff as fundraisers, in 1977 and 1979 which were hilarious and successful. One act had Brian playing Alice in a send up of Alice In Wonderland.

As well as teaching English and working on these major productions (doing set design, costumes, as well as being involved  with production) he was also Captain Corless serving as adjutant to the School Cadet Corps, and was Library Master of the substantial school library. Brian was also a superb organiser and Speech Nights a major production which required  handling with many intricate features, was Brian’s forte. Speech Night never had lapses and finished on time under Brian’s organisation.

On his retirement, at Speech Night the students sang ‘The Entrance of the Peers’ from the opera Iolanthe as a tribute to him.

He was also a gifted calligrapher and the tea lady, sighting some of this work, was moved to say “Mr Corless is so gifted he should not have been a teacher, he should have been a sign writer”.

His impeccable English was an asset to the school and in his organising Graeme Duke described him as being able to do things ‘ decently and in good order’.

He was at the school in the years of protest and revolt, mainly over the Vietnam war (the late 1960s and early 1970s). He weathered that storm and also combined with a remarkable group of talented senior teachers, who virtually ran the school. They included Ben Munday, Neville Dohan, George Rowney, Graeme Duke, David Worrall, David Niven, Norton Hobson, Colin Green, John Grigsby, Gordon Lowing and Bruce Worland. They were a formidable group – who made the Principal irrelevant. Like others in this group he sacrificed promotion to remain at Melbourne High.

There was a common purpose among this illustrious staff and a great spirit of camaraderie prevailed. There was also much fun.

All his life he was an active Anglican, at St Georges Anglican Church Malvern. At St Georges he held active roles in the running of services, singing the office, serving, and directing the liturgy. He was skilled at arranging appropriate ceremonial for all occasions. His calligraphy work was also much used by the church. He served for many years on the Vestry/Parish Council including a long period as Honorary Secretary.

At both the church and the school his brilliance at catering was also legendary. Suffering dreadful staff dinners at the school, he enquired of the Principal as to the cost. Brian then said he would produce a far better meal at a lesser cost – and indeed he did. His catering was utterly superb. So at St Georges he did annual dinners, or dinners for special events until age stopped him. Privately he entertained generously and his parties were quite amazing. He was also good at pastries and cakes and always did the annual Simnel cake for St Georges.

In retirement, and feeling idle, he did what was at first a minor job at Monash University. His sense of order though meant he ended up organising all Graduation ceremonies, not an easy task and became Esquire Bedell for the University. He performed this ancient office with panache  and his Anglican liturgical experience saw him putting into proper order not only graduating students but professors and vice-chancellors. He was so good at this, not retiring until his early 80s, that the University invited him to address his last graduation and as a surprise conferred on him an Honorary Doctor of Laws.

His work as a teacher, and for the Anglican church was recognised too with the Medal of the Order of Australia.

On the personal side he was sometimes pompously pontifical. At the school he was reputed to have pointed to a group of miscreant students and intoned “Get out of MY Library”.

Yet he could also be hilarious. As one teacher said of him “If you want a successful dinner party just invite Brian”.  Underlying a sometimes formal exterior was a person of generosity and kindness.

So we salute Dr. Brian Corless O.A.M. LLD and give thanks for his remarkable career and for all he did at Melbourne High School, helping to make it a golden age.

A funeral will be held for Brian on Thursday 17 March at 10:30am at St George’s Anglican Church, 296 Glenferrie Road, Malvern.

A tribute to Brian from Monash University can be viewed here.