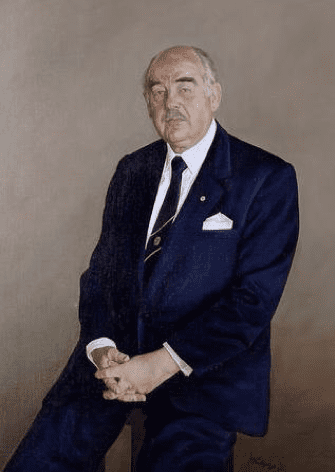 Ray Marginson had a distinguished school career as he did a professional career. He was at Melbourne High School from 1937 to 1941, coming there from East Kew Central School, he repeated Year 12, at the request of the Principal so he could return as School Captain. Deeply involved in co-curricular activities, playing Hockey (both for Waterloo and the school, Colours for both) rowing, the YMCA and the Magazine Committee (For which he won the speech night prize in 1940). He also wrote poetry which was published in the Unicorn and he won the school’s Cohen Essay Prize in 1941. A Prefect in 1940 and then School Captain and SRC Chairman in 1941, he won a Free Place to the University of Melbourne, where he was a noted Fabian.

After completing his Bachelor of Commerce he joined the Commonwealth Public Service, first as a research clerk in the Department of Transport and then with the Post Master General. He held various senior positions including Deputy Assistant Director General of the PMG from 1963-1965 as well as attending the Australian Administrative Staff College in 1957.

The University of Melbourne, needing reform of its administration engaged Ray to take on the special role of Vice-President and this he did with great success. He served too on the University Council and in 1982 became Chairman of the Melbourne and Metropolitan Board of Works. He was also vice-chair of the Melbourne Theatre Company, and a member of the Howard Florey Institute Board. He also was President of the Council of the Museum of Victoria.

He had married Betty Riley in 1947, and she was also active in community affairs and was awarded the AM, as was Ray in 1985.

He was very keen on jazz and had a great collection of jazz music and records, and was President of the Victorian Jazz Archive. He remained engaged with the school and the Old Boys’ Association, of which he was a Life Member. He donated to the school a great collection of Memorabilia which constitutes the Marginson Collection in the school archives. Together with his brother he was a keen wine connoisseur and was always good company. His brother Max (1928-2002) an academic, was at MHS 1941-44. His wife Betty had died some years ago. They had three sons and a daughter.

He was indeed a very distinguished Old Boy who honoured the work.