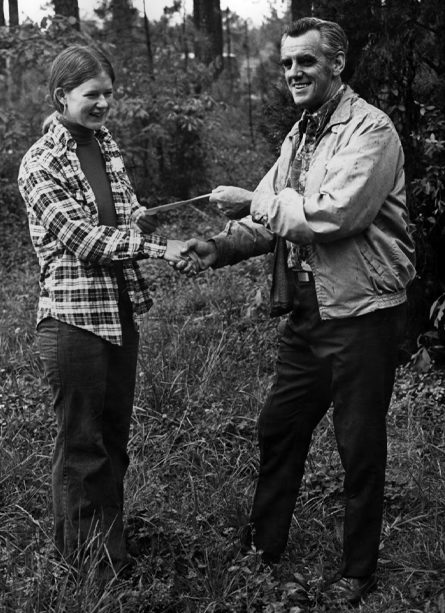 Eric transferred from Ballarat High School for fourth form, with his brother Peter also attended MHS 1938-1941. Eric was noted for his graceful dancing style in fifth form. In Sixth form he was an outstanding Como House sportsman, winning colours in Athletics, Boxing and Rifle Shooting.

Eric was successful in both the Victorian and Commonwealth Public Service entrance exams in 1940 but he went to University where he studied Science. In 1945 he was awarded one of three inaugural Bachelor of Science in Forestry (with another old boy, Geoffrey Wintle Dyer MHS 1929-1934, also one of the three). He was awarded an Honorary Doctorate of Forestry Science in 1994 by Melbourne University.

Eric Louis Ellwood died on May 27, 2020 at the age of 97 years after a brief illness. Eric was born in Melbourne, Australia in 1922. He attended Ballarat high school, graduated from the Victoria School of Forestry in 1942, and received his BSc (1944) and MSc (1951) from the University of Melbourne. He achieved a PhD in Forestry in 1953 from Yale University, where he was president of his class. He was awarded an honorary PhD from the University of Melbourne in 1987.

His early professional career was spent as a research forester and wood scientist in Australia, where he was a field forester and studied fire protection and wood technology. In 1957 he moved to America to work with the US Forest Products Laboratory as a wood technologist/professor at the University of California at Berkeley. He came to the School of Forest Resources (now the College of Natural Resources) at North Carolina State University in 1961, first as professor and then as department head of Pulp and Paper Science. In 1971 he became Dean of the School, where he served until he retired in 1989. His later career was devoted to program development and betterment of forest and natural resource research and management, as well as strategic policies at the state, national, and international levels. He was active in several professional societies and task forces during his career, holding leadership positions in many of them. His contributions were recognized by many awards and distinctions, including the Fulbright fellowship, Sheffield fellow, Forest Products Wood Award, Forestry Award, and the NC Forestry Association’s Man of the Year (1983).

Eric was preceded in death by his beloved first wife of 55 years, Dorothy Esther Ellwood (nee Caine), and his brothers William and Peter. He enjoyed a second happy marriage with his wife Mary Kilburn, by whom he is survived. He is also survived by his daughters Marian, Rosalind, and Hilary Ellwood and by Hilary’s husband Richard Ackermann; four grandchildren Eleanor Rowe (and her husband Michael Rowe), Isabel Broer (and her fiancé Brian Fedish), Caleb Ackermann, and Hannah Ackermann; a great-granddaughter Layla Rowe; and his cherished stepdaughters Amanda Kilburn (and husband Peter Bloom) and Katherine Voynow (and husband Jeff Voynow) and their families. He was assisted in his final years by many kind people, especially Celeste Riddick, whom he loved and respected, and Emily Barnes of Transitions Hospice.

Eric enjoyed a long and happy retirement. His zest for life was tremendous, as exemplified by his first skydiving jump at the young age of 92. His interests included Rotary Club of Raleigh, gardening and roses, sailing, hiking, camping, fly fishing, gourmet cooking, and travel, especially in the beautiful Western US. Later in life he became an avid and talented photographer. Like the wine Eric enjoyed drinking, he became better and mellower with age, but he was always a force of nature! Some of Eric’s words of wisdom were “Let it go and move on” and “To keep the vital juices flowing one must have a purpose or passion or both.” His number one rule of life was “Choose your parents wisely.” At his ninety-fifth birthday party, he explained that the keys to his long life were curiosity and love. Dorothy once said, “Life with Eric has not always been easy but it has always been interesting.” He was a true Renaissance man, always interested in new ideas in the world and the people around him. A bright light has gone out in the world with his passing.