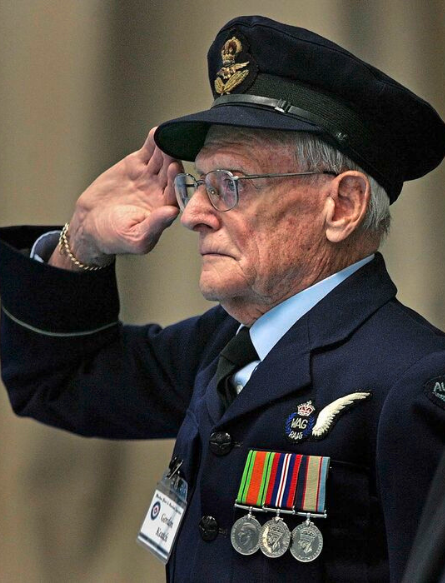 Gordon came from Middle Park Central School, he initially joined the Army in October 1942, after a year’s service with the 44 Field Battery, he joined the R.A.A.F. in December 1943.

He is survived by his sons, Ron (Janice) and Don (Sheila), grandchildren, Allison (Klaas), Erin (Patrick) and Michael (Gemma), and great-grandchildren, Ethan, Liam, Iris, Olivia and Mia. He was predeceased by his infant grandson Graham in 1977 and his wife Anne, in 2007.

Gordon was born in Melbourne, Australia, joined the Australian Air Force at age 18 and came to Winnipeg to train as a wireless operator. He met Anne during that time and they were married in Australia after the war ended.

In 1949 they returned to Winnipeg where Gordon started his business career. He became Secretary Treasurer of Kipp Kelly Limited and enjoyed many years with this successful Winnipeg-based manufacturer and distributor, retiring in 1983. During that time, he served two terms as Trustee of the St. James School Division, followed by a term as Councillor for the City of St. James. He was a founder of the Down Under Club in 1950, greatly enjoyed his association, and was the last of the original members.

Gord was an avid golfer and had a long association with Niakwa Country Club, including serving as President. He and Anne enjoyed many winters travelling, particularly to Hawaii. Gordon had a special affinity for the theatre. He was President of MTC and a long-time supporter right up to the time of his passing.  Gordie was a Sinatra fan. As Ol’ Blues Eyes said, “I did it my way.”
As published in Winnipeg Free Press on Jun 29, 2019