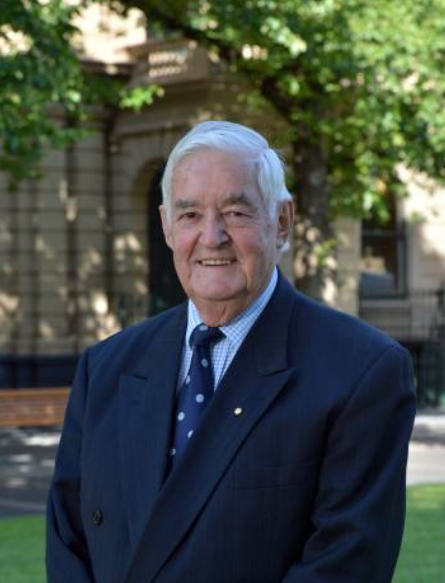 Whilst a student, he learned academic rigour and organisation, and a love for the arts and cricket.  He took over his father’s building business and later founded McKern Steel Pty Ltd in 1969 (initially called McKern Manufacturing Pty Ltd) based in West Heidelberg, Melbourne.  He moved the business to Eaglehawk in 1976, beginning a lifetime connection to Bendigo.  He rapidly expanded beyond his own business into various community groups.   He oversaw the merger of various small water works into Coliban Water (of which he was chair for 14 years), that provided an improved water supply and sewage to a large part of north central Victoria.

When local councils were merged in Victoria, he was appointed Commissioner with the then newly amalgamated City of Greater Bendigo from 1994 to 1996.  He was a valued supporter and Life Member of The Bendigo Trust (Bendigo Heritage Attractions) , support and sponsor of  the Eaglehawk Football Netball Club; President 1981-1989 of the Eaglehawk Dahlia & Arts Festival Inc.; Active member of Rotary, Past District Governor, including raising multiple millions for a Rotary Bone Marrow Donor Institute in Melbourne; Leader of the Ulumbarra Foundation; Chairman of Sandhurst Trustees; long time Sponsor, Supporter and Contributor of the Bendigo Jockey Club; President of Bendigo Regional Institute of RAFE; Chairman of La Trobe University Bendigo Regional Advisory Board; Chair of Bendigo Art Gallery, VP of the Gallery and treasurer.

View an article from the Bendigo Advertiser here: https://www.bendigoadvertiser.com.au/story/7034069/bendigo-treasure-gordon-mckern-remembered/