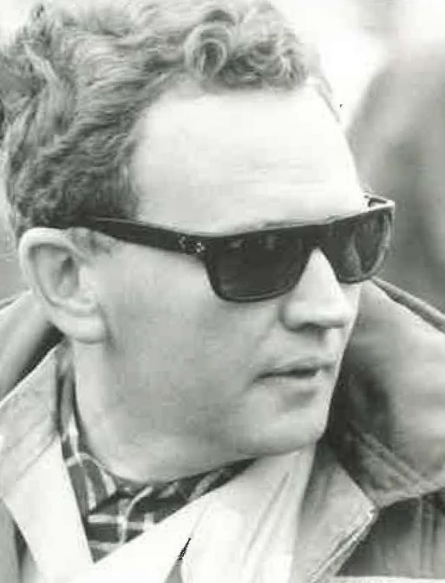 Graham transferred from Box Hill High School to complete his Matric, which he did with Honours in English Expression and Physics and won a Senior Technical Scholarship. He was a Corporal in the Cadets.

He received the Australian Sports Medal on 24 October 2000 for by far the most outstanding contributor to motor sport in virtually every category & at entry level. He also received the Medal of the Order of Australia on Queens’ Birthday 2011 for service to motor sport through a range of technical and executive roles.

CAMS is saddened to learn of the recent passing of long time CAMS Award of Merit recipient, Graham Hoinville OAM.

Having a successful career within motor sport as a competitor, sports car designer/constructor, official and administrator spanning more than 60 years, Graham exemplified the spirit of both CAMS and motor sport.

His long-standing affiliation with the sport began in 1950 when he joined the Victorian Amateur Drivers’ Club and took part in his first competitive rally, then known as a trial, in 1951.

In 1952, CAMS founding President Maurice Monk and National Secretary Donald Thompson approached Graham, then a mechanical engineer, to volunteer as a technical advisor for the newly created governing body.

That was just the beginning of Graham’s influence in the sport with his next major achievement coming eight years later, where he devised a set of regulations for touring cars. The regulations eventually came into force for the inaugural Australian Touring Car Championship in 1960 and served as Appendix J for four decades.

Graham sat on many CAMS committees throughout his time in the sport, including acting as Chairman for the inaugural National Technical Committee, serving the Historics Commission for more than 27 years, the National Rules Advisory Committee and the FIA Historic Motor Sport Commission, as well acting as the Honorary Vice-President for the FIA Appendix K Sub Committee.

Graham was also instrumental in the creation of the vital CAMS judicial system, which in turn saw the establishment of the CAMS Eligibility Committee (CEC), a committee in which he chaired for more than 30 years.

The CEC wasn’t the only one of Graham’s critical creations still in use today, with the CAMS log book and the current alpha/numeric system for historic filing systems both designed by him.

Graham also spent time as an official throughout his time in motor sport, his highest profile gigs acting as Chief Steward at Bathurst for many years, as well as for the iconic Targa Tasmania up until 1998.

Remarkably, while achieving all of this, Graham also ran a successful hire and rental business and found success in rallying as a co-driver at all levels.

Most notably, Graham will forever be known as the champion co-driver of the inaugural CAMS Australian Rally Championship alongside Harry Firth.

The pair enjoyed a successful career together, claiming a vast array of victories at a state and national level, as well as competing internationally at events such as the 1962 East African Safari Rally and the 1968 London to Sydney Marathon Rally.

It wasn’t just Firth that Graham enjoyed success with, with the highly sought after navigator also enjoying a successful stint with the one-armed Vic Cox, as well as representing Ford Motor Company on many occasions.

In 2011, for his contributions to both the community and motor sport, Graham was awarded the Order of Australia Medal (OAM), adding to his CAMS Award of Merit presented in 1972.

“Graham was an instrumental figure and one of the cornerstones of motor sport in this country and I was honoured to work with him throughout my time at CAMS,” Papadopoulos said.

“Australian motor sport has lost an iconic administrator, a passionate competitor and a genuinely good person who was well respected and highly regarded among many of the various communities within motor sport.”

“It is truly a sad day for Australian motor sport with the passing of Graham and on behalf of CAMS, I would like to pass on my sincere condolences to his family, friends and all those who worked with him.”

“I know his legacy will continue to live on for many years to come.”

His son Steve also honoured Graham’s life on behalf of the Hoinville family.

“He was crucial to the very existence of CAMS and was one of the most respected people in the motor racing industry in both this country and worldwide,” Steve said.

“He managed a business and held a number of achievements in not only motor racing, but for other passions as well including skiing and contributing to his community. All of which he seemed to do with ease.”

“He sat on the Ambulance Victoria Technical Advisory board as an advisor for many years and his capacity to do things for other people, as well as still manage to carve out a successful career in motor sport, was extraordinary.”

“He was remarkable man, an inspirational friend and a fantastic father to us all.”