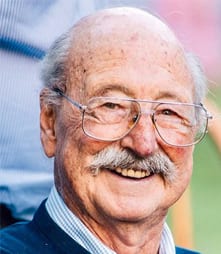 James (Jim) Milne came to MHS in 1938, the year before World War Two broke out. He was the only child of James Gordon Milne, a Gallipoli veteran, and Dora (nee Isaacs). In his own words, his parents “knew nothing” about education and he was always grateful for the start that MHS gave him.

He was thankful that a scholarship from the Old Boys Association paid the fees for him. He was taught, amongst others, by Bill Woodfull, the ex-captain of the Australian Cricket team, (later the Principal of MHS) described by Jim as “A dead shot with a piece of chalk”. Jim was Form Captain in year 11 (‘Leaving’) and acting School Captain after the 6th formers finished. He became a Prefect and House Captain of Como house in his final year and made some lifelong friends, including Alec Jenkins, Keith Ross, Eric Ebbott and Bruce Fry.

In 1942, he completed the first year of Metallurgical Engineering at the University of Melbourne. He was desperate to join the RAAF and did so in 1943. He loved flying and enjoyed his time in Deniliquin and Mildura but wished for a bit more action in Darwin. At the end of the war, as an ex-serviceman, he was eligible to have his university fees paid by the government and was thus able to study Medicine. After graduation, he married June Prentice and they were a devoted couple for nearly 66 years.

Jim worked in psychiatric hospitals in Royal Park and Sunbury and later became the solo GP in Sunbury for 9 years. He began working at the State Health Department in the 1960s, beginning a long and distinguished career in Occupational Health, a specialty that was just beginning at that time. In 1970, he was awarded a Churchill Fellowship to complete an M.Sc in Occupational Medicine at the London School of Hygiene and Tropical Medicine. He later spent two years working at the International Agency for Research on Cancer in Lyon, France, a destination that delighted his wife and family. He was instrumental in the formation of the Australasian College of Occupational Medicine.

His interests covered a wide spectrum. He was an accomplished painter and avid reader. He enjoyed football and cricket, opera and theatre. He loved swimming and was convinced by his son to compete in the Alice Springs Masters’ games in his 80s. His record for the 50m breaststroke 80-84 years age group still stands. He was a devoted family man and was dearly loved by his extended family.