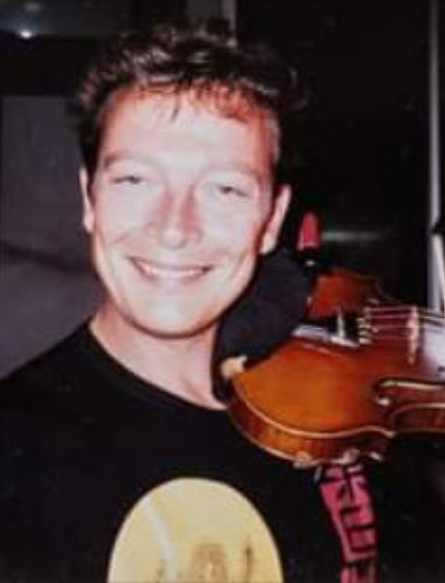 One of two brothers to attend Melbourne High School, he played in the School Orchestra and was known as an outgoing, engaging student, who relished the co-curricular side of the school.  He played the violin (fiddle) with the band the Bushwackers in the later part of the 1970’s and into the early 1980’s.  He married Rebekah and was the father of Stella and Silas.

Our friend Michael Harris has been having an extremely challenging battle with pancreatic cancer for the last two years.  You probably know Michael as the charismatic fiddle player who has graced our folk music stages with impeccable presence and style over these past many years. You may have seen and heard him play with The Bushwackers, The Whirling Furphies, Rebels Without a Clue, Crawfish Dave, Luna-C, Bush Turkey, Circus Oz, Duck Musique, Gerry Hale and the Innocent Bystanders, Merri Creak, Sean and the Fiddler, Black Velvet Band, The Fruitcake, Kangaroo Marriage, Pat McKernan, The Phantom Band, Melbourne Theatre Company, Ced le Meledo and many more.

As well as being an outstanding musician, Michael is also a loving dad and husband, a loyal friend and an instrumental teacher.

After a remission period of 7 months, Michael was given the news the pancreatic cancer had recurred and he is now 3 months into another long and difficult stint of chemotherapy. Unfortunately these chemo sessions have meant it has been too difficult for Michael to work through the last year and into the foreseeable future.