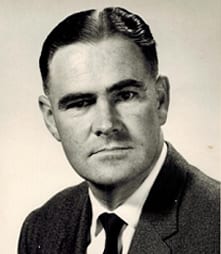 Noel was one of that band of students who saw little of the “Castle on the Hill”. When the School was loaned to American Forces during WW2, the boys were dispersed elsewhere. To Noel’s delight, he was assigned to Tooronga Road School, just around the corner from his home.

He was a friend of Ken Jack who painted the great series of water colours of the School and gained international recognition. Noel remembered vividly, holding Ken’s easel as he painted Flinders Street Station in blustery conditions. According to The Unicorn, he was a noted Cross Country runner – notable for his ability to run last. He left MHS to join Dalgety and Co, an Australian company listed on both the London and Australian Stock Exchanges – unusual at the time. They became Australia’s largest Stock and Station Agent, and were our largest wool exporter.

Noel rose to become Financial Director of what had become an international conglomerate, with interests in wine (the Saltram winery) and Scotch whisky as well as the traditional areas of agriculture. He became a globetrotter. An early colleague at Dalgety’s was Errol Flynn who charmed everyone and borrowed from most. After he became a Hollywood superstar, a group from the office wrote to him, suggesting that he might now be able to repay his loans. He did – an autographed photo for each of them!

Upon retirement Noel, and wife Alison, became farmers on a picturesque property outside Taree in northern NSW. He passed away in his sleep.