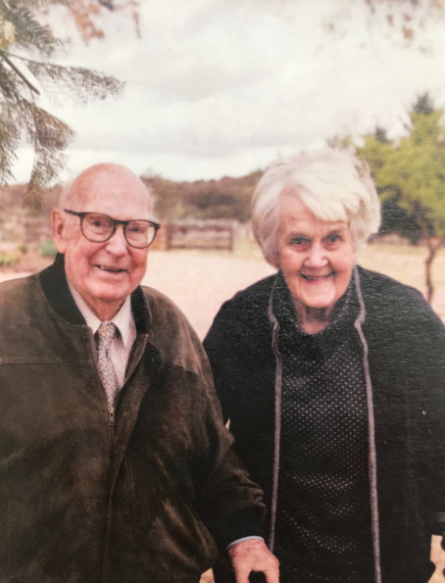 Pat Lesslie has died in Canberra on 3 April 2021 aged 93. Pat was the second daughter of Brigadier George Furner Langley and his wife Edmee Langley.

Born in Melbourne she attended the schools her Father was attached to, notably at Warrnambool High School, and completed her education at Melbourne Girls Grammar before qualifying as a physiotherapist. Circumstances took her to Sydney for work and there she met Russ Lesslie, a stockbroker, whom she married. They had one son, Robert.

When infirmity forced Brigadier Langley and Edmee to move from Melbourne to be near their daughters in Sydney, Pat and Russ bought a house adjacent to them in Killarra and Pat and her sister Doreen looked after them. Doreen, a nutrionist, who had been Principal of University Womens’ College at the University of Sydney, died from cancer.

As Pat and her husband Russ aged they decided to move to an aged care village in Canberra to be near their son Robert and his wife Lynne and their daughter Ellen. Robert, having completed an excellent PhD, was a high-ranking scientist with interests in environmental issues and held a senior post in the Commonwealth Public Service.

Tragically Robert died from a rare form of cancer in his late 40s. This was a great blow to them. Pat had a welcoming personality and genuine interest in the lives of others ensured a wide circle of friends; that she and Russ enjoyed all that cultural life in Canberra had to offer, and that she took great delight in the natural world around her, in both its greatest and its smallest incarnations.

Pat appreciated the interest the School and its students took in her father Brigadier Langley, and donated many of his papers to the school. She was also a generous donor to the Melbourne High School Foundation. She was proud of MHS and so pleased that her father’s memory had been kept alive.

Pat and Russ (who died late 2020) were a wonderful couple, lovely caring people, who kept in touch with a number of Old Boys.