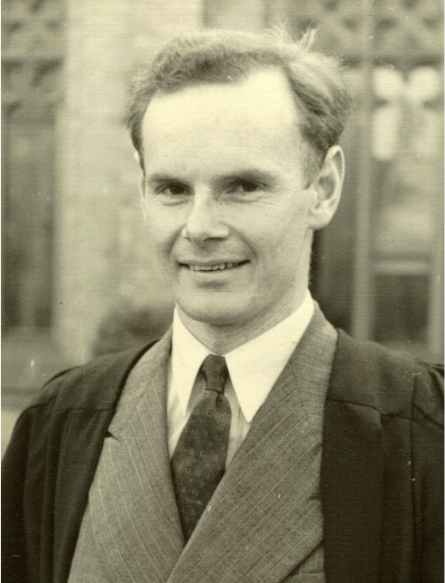 The school’s oldest living teacher when he died aged 98, Jack (never John Stradbroke)  was at MHS from 1936 to 1939 At school he was  known as an excellent scholar and also as a cricketer. He did a BA and Dip Ed at the University of Melbourne and became a teacher with the Victorian Education Department. He was ten years with the Department.  He taught at MHS from 1946 to 1950 and returned again to teach for part of 1952. As a teacher he was

Assistant Como House Master, he supported the United Nations Club, the Craft Club, and the Light Music Club. An Assembly was given a twist when fellow teacher, Lloyd Evans (a concert level tenor) sang a song, accompanied on the piano by Jack Gregory.

In a memoir which he supplied to the school he said:

“I taught at Melbourne High School for five years, from 1946 to 1950, and what demanding, rewarding years they were. They remain in my mind now as my best years as a teacher at any level, primary, secondary of tertiary, over the more than forty years I spent as a teacher. How could they be otherwise, given the quality of students set before me?”

He completed an MA at The University of Melbourne and his thesis published in 1973  Church and state: changing government policies towards religion in Australia, with particular reference to Victoria since separation  was known as the key thesis on the Education Act of 1872 and was oft quoted as the “Gregory Thesis.”

However he left the Education Department and undertook his doctorate at the University of London, where he specialised in Chinese history and culture.

He became a Lecturer then Reader in History at the University of Melbourne 1958 to 1967. Then in 1968 Reader, and Professor of History at La Trobe University – until his retirement. At La Trobe he specialised in Chinese history and culture.

He was a prolific writer and among his notable books were:

J S Gregory, Great Britain and the Taipings  1969 , which went into many editions, was  the first full study of British reactions to the major civil war known as the Taiping Rebellion which ravaged China in the midnineteenth century;

J S Gregory The West and China since 1500    2002. “Chinese fleets sailed through Asian waters as far as Africa in the early fifteenth century, when Western explorers were just beginning to probe the great oceans of the world. The Chinese turned back while the Westerners pressed on, to dominate virtually the whole world, including China, by the nineteenth century. Would world history have been different had the Chinese not withdrawn from the seas? This book surveys the history of the West’s

J S Gregory The Chinese and their revolutions    1984

J S Gregory The West and China : an historical perspective  1971

In addition to these key books were many articles and reviews. As a teacher he was outstanding and much liked by his pupils at both school and university level. A caring teacher, he was much admired as a supervisor of students for higher degrees.  He was always very modest and self effacing. He was a lovely man, who maintained a keen interest in his old schools and was often seen at old boy functions.