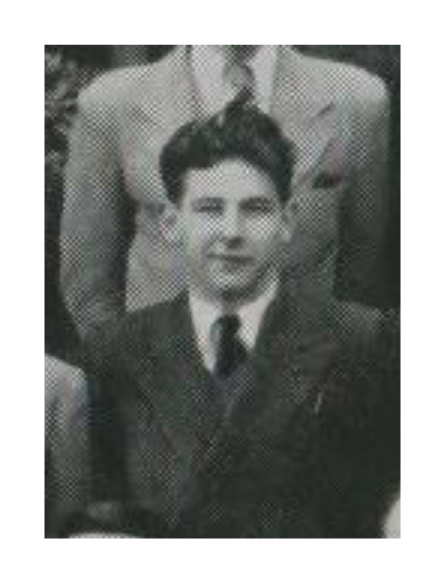 A Returned Serviceman, but from the British Army, he completed his studies with Matric Honours in Pure Maths.

When the University of New South Wales decided to design and build a giant Millennium Sundial to grace its quadrangle, it was presented with a host of technical challenges, involving astronomy, surveying, celestial navigation and engineering, to name a few. To solve the intricate problems of this 350kg bronze, sun clock to be positioned on a wall towering above the students in the quadrangle, the University turned to a retired professor of surveying, Dr George Bennett.

Bennett relished the challenge to contribute to the University of NSW, and to the wider community and in 2000, designed and managed, from concept to finish, the entire project, including the casting of the centrepiece gnomon (pointer).

Dr William Kearsley a former student of Dr Bennett’s and the then Associate Professor and Head of the School of Surveying, at UNSW said that the sundial “is now regarded as one of the great assets of the University. It both enhances the teaching of fundamental concepts for positioning in the Surveying and Spatial Information Systems program and adds beauty to the Quadrangle Building at this University.”

However, Bennett’s contribution extended well beyond this convergence of science and art, as he subsequently donated his fee to the university, which used it to establish a prize for the top-performing student in the first year of study in the School of Surveying and Spatial Information Systems at UNSW.

George Gordon Bennett was born in Croydon, London, on December 21, 1926 to George Bennett, a builder, and his wife, Winifred. The younger George was educated at Selhurst Grammar School in Croydon and, following demobilisation from the British Army in 1948, George and Winifred, and George and his sister Joan, settled in Australia as “ten-pound Poms”. George met Molly Delaney at the University of Melbourne Fencing Club, where he won a Full Blue for Fencing. They were married on January 12, 1952.

George Bennett and Bill Kearsley at the Millennium Sundial at the University of NSW.

In 1954, Bennett was in the second graduating class, with First Class Honours, from the Department of Surveying, University of Melbourne. He was a surveyor on the Snowy Mountains Hydro-Electric Scheme for the next five years and played a major role in setting out the tunnels and dams of the Snowy scheme.

In the International Geophysical Year 1957 Bennett was seconded to National Mapping to assist in Australia’s fledging space program by making astronomical observations in South Australia to assist in laying out the Woomera rocket range. For this work he was awarded the Master of Surveying from the University of Melbourne in 1962. After working on the Snowy he became a lecturer at the University of NSW in 1959 and obtained his PhD in 1970, finishing his career as Head of the School of Surveying in 1986.

He was awarded the Thornton-Smith Medal from the University of Melbourne in 1999, for an outstanding contribution to the engineering profession in the field of Geomatics.

His interest in navigation and nautical astronomy led him into yachting, where he served as navigator on many Sydney to Hobart yacht races. In 1977, he won the inaugural Navigator’s Trophy in this race. He later developed computer programs for the reduction of observations and for generating almanac data, and in 1998 wrote The Complete On-Board Celestial Navigator, a revolutionary text allowing yacht navigators to carry a simple, waterproof, comprehensive compendium of navigational almanac data in one small book as a backup if electronic navigation failed.

Bennett was recognised with an OAM in January 2006. His citation read: “For service to surveying and mapping, particularly as an educator and a specialist in the field of celestial navigation and positional astronomy”.