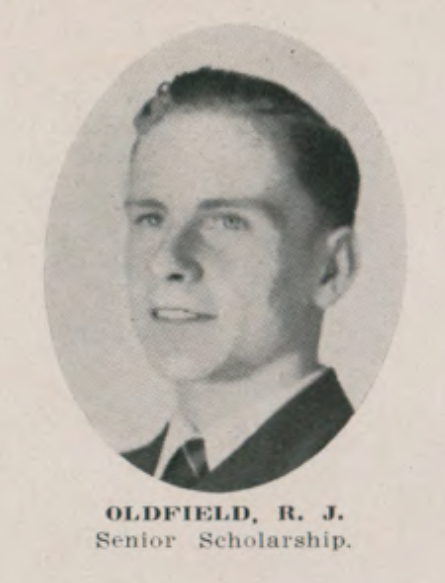 Ronald came across from Camberwell High School (where he had spent a year since migrating from India) to complete his Matriculation, he passed with Honours in General Mathematics, but this seems not have been enough, and he came back for a second year, receiving Honours in Chemistry, Geology, Geography, British History and a Senior Scholarship.  He played Hockey for both the School (Vice Captain) and Forrest House, receiving Colours and the 1950 Speech Night Prize.  For Forrest he was also in the debating and Athletics teams. He was also editor of The Sentinel from June 1950, during which time it was trialled as a joint newspaper with Mac.Robertson Girls’ High School.

Friends and colleagues will be saddened to hear that Ron Oldfield passed away peacefully on 25th April, 2021. Over many years, Ron made a remarkable contribution to the Department of Biological Sciences. Initially, he trained in microscopy at the University of Melbourne, then, in 1961, accepted an appointment in the electron microscopy unit at the University of Sydney.  At that time, Frank Mercer was the Foundation Professor of the School of Biological Sciences at Macquarie University which had newly opened in 1964. In 1966, Frank head-hunted Ron from Sydney University to become the first non-professorial appointment in Biology at Macquarie.  Ron retired from his position as Senior Lecturer in the late 1997, and continued as a Research Fellow with many and varied interests until 2016.

Ron and Frank Mercer worked together to establish a microscopy unit within the school, this was a pioneering integrated laboratory for light and electron microscopy, and for scientific photography. Ron taught undergraduate units in light microscopy and also conducted Continuing Education courses in microscopy which attracted many interstate participants. Ron very generously also made sure that every member of technical staff had the opportunity to attend these courses and train in microscopy. We were interested to hear that several biologists later appointed to academic positions at Macquarie were taught microscopy by Ron while post-graduate students at University of Sydney. During this time, in addition to his teaching responsibilities, Ron also successfully managed the Department’s finances. He was elected to University Council in 1967.

Robyn Isberg was one of the first technicians in Biology and worked with Ron for many years. She wrote: To know and work with him was to admire Ron, and one also became both colleague and friend. He put his technical assistants on pedestals – and delighted in their continued friendship. To say one was ‘Oldfield trained’ in microscopy, became a source of pride. His microscopy course at Macquarie and subsequent publications became a tribute to his mentor – Ernst Matthaei, lecturer in microscopy at Melbourne University and a student of Ernst Abbe (Germany) who developed the Abbe theory of microscope image formation that has become the basis of microscopy today. Ron’s skill was in quiet perseverance, dedication to his craft and commitment to one of the greatest tools of science.

Ron was born in India, so no surprise his great love of cricket, but he was also an extremely talented hockey player and came very close to representing Australia at the Melbourne Olympic Games. Many will remember him as a particularly skilful volleyball player.

During his time at Macquarie, Ron co-authored a number of books, including A Colour Atlas of Pathogenic Fungi 1979 and Photography with a Microscope 2000. He also published numerous journal articles including, most recently, ‘A prehistoric Egyptian Mummy’ published in Journal of Archaeological Science in 2018.  He was the sole author of Light Microscopy – An Illustrated Guide, first published in 1994. For quite a few years both before and after his retirement, Ron contributed significantly to bryophyte (moss) studies, and has co-authored numerous publications in this field. He has always been generous with permissions to use his photographs, and many were used for a series The Forgotten Flora, produced by the National Herbarium of Victoria. Many can be seen in the Flora of Australia, Australian Mosses OnLine.

Ron has had outstanding success in international photomicrographic competitions. One of the most prestigious was winning a Eureka Award in 2009, others included Polaroid (1984, 1985, 1986, 1988, 1989), Fluka (2003), Nikon (2003, 2004) and Olympus (2004). Many of his winning results can be seen in corridor displays in the Biology buildings. His photographs were also showcased in several photographic exhibitions at Macquarie University, co-ordinated by staff of the Macquarie University Art Gallery and elsewhere.

Ron generously shared his knowledge and time, having a positive impact on the life and careers of many colleagues and students. Jann Hayman, one of the first five technicians appointed to Biology wrote:   … he ran the School’s administration and was the glue that kept the department together – he was everywhere, and could quietly appear when you would least expect it! Ron never appeared to have his feathers ruffled….he remained firm yet smiling, providing direction when tricky situations arose.

Mark Westoby has expanded on Jann’s words: It’s hard to explain just how much Ron contributed to making everything work in the School. The thing is, it seems to me, that Ron and Frank Mercer were truly complementary. Frank was chatty and spent his energies selecting good people and encouraging them. He talked with Ron about his decisions all the time and Ron took those ideas and made them work. Ron had seemingly total power over the finances, and keep in mind, this was well before the days of elaborate online procedures when everything has to be signed off by five different people. Once he had decided that you were genuine, that is, you only used money for benefit of the School and didn’t waste it, he could arrange matters so that a project or initiative could get underway. I’m sure he was recruited by Frank because he was entirely honest and could be trusted to use funds, equipment and space only for the good of the School. Ron applied the same sort of character test to the rest of us. Frank and Ron between them added up to near-perfect leadership for a School developing its strength and identity but Ron gave continuity as well — the practical implementer working with other Heads of School for another 15 years or so after Frank stepped back.

Perhaps these final words from Mark convey the impact and the importance of Ron’s time at Macquarie. Mark wrote:  I remember when Ron spoke at Frank Mercer’s memorial in the garden, he said “if you seek his monument, look around you”. (a famous quote, in Latin, Lector si monumentum requiris circumspice, from the plaque of architect Christopher Wren, in St Paul’s Cathedral, London). You could absolutely say the same for Ron. Ron was the backbone of the School through its building phase — 60s to early 2000s.