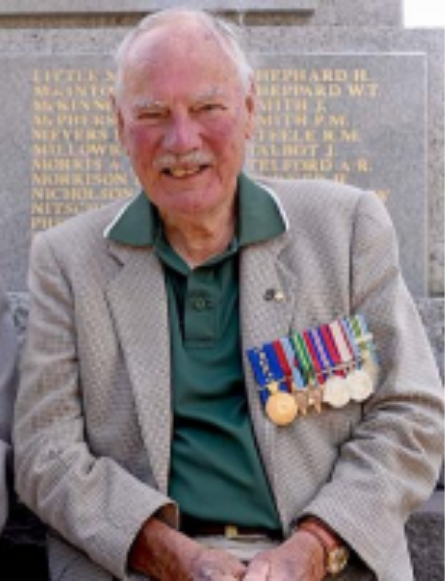 Charlie was awarded the Medal of the Order of Australia in the 2005 Queen’s Birthday Honours List, for service to the community of Mount Gambier through a range of ex-Service, commerce, welfare and cultural organisations.

The following article comes from the winning entry of the South Australian Premier’s Anzac Spirit School Prize for 2019.

Rowley Charles Miller, more commonly known as Charlie, was born in May, 1924 to his parents John and Mary Miller in Kew, Melbourne (Sandow, 2017), (Yates, 2019). In his early childhood they moved to St. Kilda as his mother was taken ill. In 1938 the depression began to take its toll on his father’s business as little to no money was coming in. So John and Mary along with their two sons and a daughter decided to move to Mount Gambier, here John started a local bread baking business.

Charlie received his education from three different schools; a school in Elwood, Melbourne Boys’ High School and Mount Gambier High School. From Year Seven to Nine he described his education as quite interesting as many Jewish families had settled down klicka for att lasa mer in Elwood and they attended the same school. Here he heard many different stories about Hitler and his cruelty towards the Jews (Sandow, 2017).

When Australia and New Zealand declared that they were entering the war on the third of September, 1939 Charlie was only 15 years of age therefore too young to enlist and fight. After leaving school at age 16 he got a job with a stock and station agent called Elder Smith and Company, although he claims he only took it as it was a temporary position (Sandow, 2017). Like many other young men his age, his dream profession was to become a pilot. He turned 18 in May, 1942 and a month later he was called up for aircrew. His brother also signed up for war and was part of the Light Horse Brigade (Yates, 2019).

Charlie did two months of intense training and once he proved his outstanding abilities he was chosen to be a pilot. After another month of training he was sent to an elementary flying school. Here, he learnt to fly the Tiger Moths and Charlie states that his first solo flight was a “thrill and the biggest achievement” (Sandow, 2017). The next year, in 1943 he trained in an aircraft called a Wirraway and 12 months later he was sent off to an operational training unit which flew Kittyhawks (Yates, 2019). Charlie was only there for a short period of time before a dozen pilots were chosen to be transferred to a Spitfire squadron (Sandow, 2017). This was the beginning of his time in the cockpit of a Spitfire.

To begin with Charlie was not sent away to the action, instead they made him a flying instructor along with 11 other pilots. While he was disappointed that he was not sent away to fight, Charlie found that he enjoyed his role as a flying instructor. As he stayed behind to train other pilots, he learnt a lot more about flying and this greatly improved his skills. He was a flying instructor from 1943 to 1944 (Yates, 2019). Eventually after joining 85 Squadron in December, 1944 he was trained to become a fighter pilot at an RAAF station near Perth, however they did not see any combat.

Charlie was then posted to 457 Squadron in 1945, its primary role was to provide support to the ground troops (Hamilton and Listemann, 2019). While Charlie was not involved in any particular battle, he was a fighter pilot, strafing Japanese strongholds with his machine guns and cannons, particularly ones uncovered by the army in New Guinea and Borneo. Whilst Charlie humbly proclaims he was not a hero many still believe he was, as strafing was one of the most dangerous forms of flying and to get it wrong would have been fatal (Yates, 2019). The group of pilots would usually fly in groups of four in the Finger Four formation. The 3rd finger was the leader, with the 2nd on his left and 1st and 4th on the leaders right (Sandow, 2017).

Much to the relief of his parents he survived and was discharged in April, 1946 (Hamilton and Listemann, 2019). His final rank as part of the Air Force was Warrant Officer (Vwma.org.au, 2019). From here Charlie decided he wanted to go to university and study science. However once arriving back home he noticed his father was struggling with running his bakery. Subsequently he decided to teach himself how to bake bread and took over the business that went from twenty to 180 staff (Sandow, 2017). Later on he got married to a local woman named Lillian Boardman and they had three boys Tony, Martin and Steven Miller (Yates, 2019). For many years Charlie undertook the role of president of the Mount Gambier RSL. Unfortunately his wife passed away leaving him to look after the house alone but Charlie describes this independence as the key to his long and thrilling life.

After recuperating from heart surgery Charlie is still a great asset to our local community and he looks forward to celebrating his 100th birthday in five years time. In the interview with Bob Sandow he was quoted as saying “If you joined the Army you were one of tens of thousands, if you joined the Navy you were restricted to a ship, but to be in the Air Force with certain freedom particularly as a pilot you had enormous freedom. It seemed to me and the young fellows at the time a thrilling lifestyle in a very unhappy and cruel war, and it was an extraordinary experience right from the word go” (Sandow, 2017).