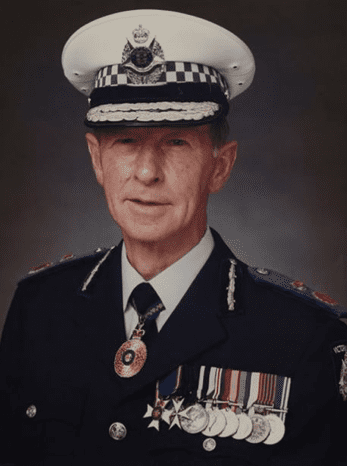 Mick Miller attended Melbourne High School in 1940 and 1941, coming to the school from Camberwell Central. He was active in Lacrosse, earning colours, and was involved with the YMCA club. He left to enlist in the AIF serving in the Australian Armoured Squad.

Mick joined the Victorian Police Force in 1947 serving at police stations in Richmond, Brunswick and Prahran. He soon became known for his honesty in a period when there were groups of corrupt police. He was then appointed to the Vice Squad and then to the Homicide Squad. The then Chief Commissioner, Major General Selwyn Porter recognised his ability and integrity.

Miller was largely responsible for cleaning out illegal book-making and consequently the government set up the TAB. He travelled overseas in 1967 on a Churchill Fellowship looking at the latest in law enforcement. In 1971 he was appointed Assistant Commissioner for Operations and Crime, making many sensible decisions. He was also involved with ex-MHS teacher Lindsay Thompson in the Farraday kidnapping in 1972 (Miller was under a blanket in the back of the car with a rifle, whilst Lindsay Thompson stood with a bag of cash, waiting to hand to the kidnapper) and the Wooreen incident in 1977. In 1977 Mick Miller was appointed Chief Commissioner of Police a post he held with great distinction for ten years. The Premier at the time, Dick Hamer wanted a scandal free Chief Commissioner.

Miller proved a remarkable Chief Commissioner making visits to police in hospital or injured, he modernised the police force, introduced Neighbourhood Watch, established the Police Air Wing, introduced task force policing, set up the Special Operations Group (to combat potential terrorism) and revolutionised detective training. An influential Police Commissioner he was much loved and respected by the Victorian Police and was accorded many honours.

In his long retirement he undertook many charitable activities, including the Reclink Football League, Bereavement Assistance, Meals on Wheels, the Hawthorn Football Club and many other groups. One of the school’s Distinguished Old Boys, who was inducted in 1999, his photo is proudly displayed in the corridor of the school. One of our greatest Old Boys who truly Honoured the Work.