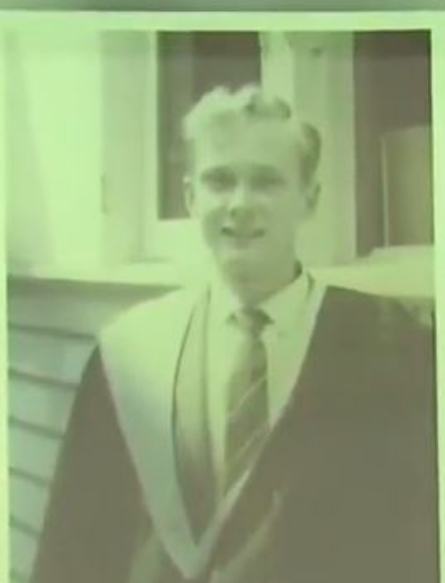 Stephen’s father, Oswald Trethewey Amos had attended Melbourne High School 1924-1927, where he played in the 1st and A XVIII, the A XI (the school had no 1st XI, but an A and a Z team based on surname, to reduce our unfair advantage), and House Cricket and Football for Blue House.  He qualified as a Dental Surgeon, and joined the Royal Australian Navy in WWII.  Serving on shore stations in Victoria, as well as aboard H.M.A.S. Australia, he was in Perth at the end of the war, and  Stephen recalled the long train trip back to Melbourne, across the Nullarbor.

An active member of Forrest House, in the Debating and Athletics teams and Conductor in 1956.  He joined the School Choir in 1955 and was on the Magazine Committee and with The Sentinel.  School friends would travel to his family’s holiday house in Mount Eliza where Stephen had a small boat his father had given him.  Completing his Matric with Honours in Geography and Modern History with a Commonwealth Scholarship to University, with two years in Ormond College, where he studied Commerce.

He taught himself Cornish (via Breton), a foundation member and the second Bard of the Cornish Association of Victoria.  He gave talks in Cornish about Cornish history.  He translated from Breton several short stories into Cornish and translated appropriately the Book of Amos in the bible into Cornish.  An accomplished organist, playing at the North Balwyn Presbyterian Church on Sundays.  Completed National Service in the Army, training at Puckapunyal, where the lack of ear protection at rifle practice left him with tinnitus for life.  Joined the Reserve Bank and the Victorian Public Service, before poor mental health interrupted his career.  He worked for his father in his dental surgery before returning to studies in 1979-1980 and then working as an Accountant, joining Australia Post, where for worked for 18 years until 1999.  An avid family historian, he travelled to Scotland to research his mother’s family, and to Cornwall to research his father’s family.  A generous man supporting many charities, his health deteriorated in recent years, stopping him from reading as much as he wanted, but he found interest in TV and the internet.

His funeral is available online at:  https://www.youtube.com/watch?v=91u9FT4i6VE