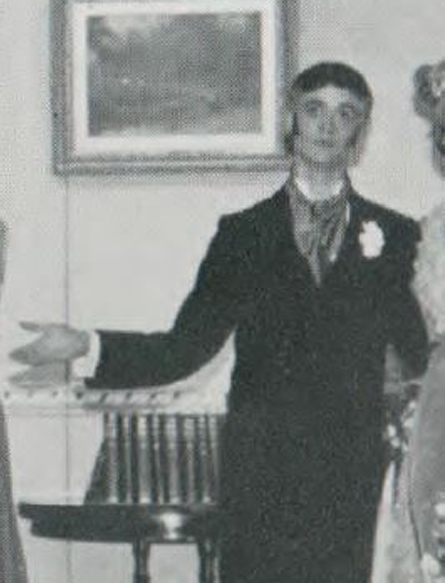 Stewart was a noted actor from his early days at MHS, involved in House Dramatics for Yarra and the school play. A member of the Marionette Club in 1957 he showed his artistic versatility when he wrote the script of a play, designed the sets and characters for his play “Days of the Week”. He remained heavily involved in drama throughout his time, extending his talents to make-up, assisting with the performance of The Mikado in 1960. In 1961 he returned to the school to execute the design of the sets for the school play, The Matchmaker.

The colourful, courageous and confronting creations of Stewart Merrett are surviving evidence of how he turned what was often called a folk art into a fine art.

He christened this, his own art form, as “aplekage” – a combination of appliqué embroidery and collage. And while his work was flamboyant and vibrant, he never wanted them to be, in his words, “intimidating, precious or intellectual”.

Merrett was born in 1943 and spent his first years on the banks of the Murray. The family later moved to Moorrabbin and Stewart was accepted at Melbourne Boys High School. His theatricality was already evident here when he won their annual Talent Quest dressed in sophisticated drag with orchids tucked behind his ear, delivering a husky monologue written by Noel Coward, which started with: “I was having cocktails with Maud the other day …”

He then starred in full-length plays, which were the highlights of the high school year. He took both male and female roles – culminating with Oscar Wilde’s The Importance of Being Ernest.

Stewart often said he inherited his sense of humour from his mother, Marge, but he made it into an art form with a wit and cynicism worthy of Wilde himself. “One had to be wary of not having a ‘mouth like a torn pocket’…”

After school he went to RMIT and graduated with honours in illustration and design (with thoughts of theatrical set designing in mind). His first job, however, was with Myer department store, where he created colourful counters, ceilings and sets for special occasions. Later he would join L’Oreal as an art director, specifically to work on their packaging.

He then took off for an Australian’s mandatory trip overseas. He went through Asia, Europe and America, before landing in Britain, where he decided to stay. He worked as an illustrator but it was then his interest in textiles came to him – in fact, while he was working in London, he was totally captured by a collection of richly embroidered Chinese and Japanese costumes at a Sotheby’s auction. He became fascinated by the colours and textures of textiles – in all their different forms. It was a natural progression that textile art became his primary occupation when he came home in 1978.

He went abroad often, though, and always said that wherever he went, he was searching for a new idea, a different art form which, on coming home, he incorporated into his work with fabrics, embroidery and collage.

He opened a studio in Melbourne and was immediately overwhelmed by private commissions from people who did not want a beige sofa and three flying ducks on the wall. They wanted something new and they wanted it “Made in Australia”.

Meantime, he worked long hours to get a collection together to stage a one-man exhibition. Despite its quirky character, it was a total sell-out and led to a number of international commissions. It also led to a second one-man exhibition that earned him the Coats Paton Craft Award.

One of his major commissions came from the master architect, I.M. Pei, when the American was working in Melbourne on the Wentworth Hotel (later the 5-star Regent and now the Sofitel at the top of Collins Street). Mr Pei said he wanted a “sight-seeing must for tourists and a visual feast for Melburnians”. Merrett gave him floor-to-ceiling black swans in French velvet and satin. This led to other hotel commissions: the Tapestry Bar at the Hilton in Melbourne. Then a 12-panel piece depicting arum lilies for the Casino in Darwin. Another of a saucy trumpeting angel for the casino in Alice Springs, where he also made a more serious mural of an emu grazing in grasslands. Then an equine theme for the Turf Clubs in NSW and Queensland. And who could forget the huge portraits of Groucho Marx and Marilyn Monroe at Jetset House in Queen Street, Melbourne?

One of his proudest was a commission for a wall piece from the Sultan of Brunei for his magnificent palace outside Bandar Seri Begawan. And one of his more enjoyable private commissions was for his old chum, Danny La Rue, for the apartment he had for some years in Queensland. And he even decorated a tram.

Stewart was a gregarious, colourful man and his life and art reflected his unique personality. He was a very well-known figure around Melbourne, not least because of his red Volkswagen that was known as “The Slasher”. In the passenger seat on sorties would be the likes of said Danny La Rue and the society doyennes, Lillian Wightman and Sheila Scotter.

Life was, however, not always such fun. Stewart was devastated by the loss of his only daughter Zoe (named after his friend, the great Zoe Caldwell) who died when she was just seven years old. Stewart made lecture tours and conducted textile workshops. He laughed about his “overnight success”, pointing out that his first book called Appliqué Art in 1993 was the result of 16 long years of hard creative work.

It probably made the process easier because just a year later his second book, Appliqué Alphabet (1994), was published. He showed that appliqué remained a classic technique that has been updated to a cutting-edge contemporary art form, but still keeping the basic techniques of layering, patchwork and embroidery.

The illuminated letters in this led to the sold-out publication of Cross Stitch Fruit & Flower Alphabet in 1997, something that also marked his move into creative cross-stitching and tapestries.

Stewart was also a dab hand at bold screen printing. His lines were simple, his colours vivid and his composition was perfect, its wonderful geometry evocative of textile appliqué.

A typical Cancerian, Stewart’s focus was on his home. But he always chose roomy houses where there would be space for a large studio-workshop into which he could escape whenever he had a creative urge.

Guests from overseas often stayed with him and there was always space for a stray who needed a haven. He was always passionate, supportive and loyal to the friends he loved.

And he was a man loved back by many, especially in the idyllic town of Clunes he called home in his later years. It’s tucked away in the hills outside Melbourne, where he lived out a quiet life, surrounded by the nature that featured in so many of his recent works.

Stewart loved Clunes and never tired of viewing it first hand – while outsiders only saw it as a location for many Australian movies. Its lovely main street of bluestone and sandstone buildings make it one of the last 19th century images of a bygone Victoria.

He set up house on the outskirts of the town where his companions were the birds and the wallabies. He loved to garden and his orchard provided apples, plums, apricots and pears for his table. It was a toss-up whether he was fonder of his rose garden or the prolific rhubarb that had found its perfect microclimate.

He was exceedingly generous and enjoyed entertaining his friends with energetic flair at lavish dinners or Sunday brunches. Even his cooking style was avant-garde and the menus were thrown together with great panache.

Today, Stewart Merrett’s works are displayed in a surprising number of public and corporate spaces around the world and held in many private art collections. His message was that the simple art of appliqué is something anybody can do. He once said: “Just sit at your sewing machine and have a go”. We might, but it is doubtful the results would be anything like his masterful artworks.

Merrett struggled with Parkinson’s Disease for some years and finally succumbed to its complications. He is survived by his sister, Ann. He requested no funeral or service be held.