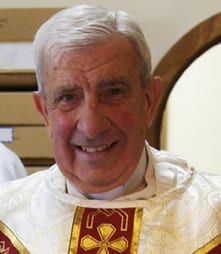 George Lucas attended MHS in 1947 and was an outstanding student, gaining honours in Geology and History at his Matriculation. He also won a scholarship to Trinity College at the University of Melbourne. He then entered the priesthood of the Anglican Church. I recall George Lucas as a truly great parish priest. What an impact he had at St George’s Malvern and indeed in every parish he served. At St Georges, George coped with four services each Sunday – including that memorable Children’s Service which attracted hundreds and gave new spiritual life to so many. It was a demanding congregation – with many intelligent minds in the congregation to question his sermons.

As a Vicar he had the uncanny knack of engaging with people – of getting his Vestry to work and do things, of involving the laity. He embraced all the organisations in the parish. He preached brilliant sermons – he was wonderful in helping the bereaved and hitting the right note in his funeral addresses. He brought the life of Christ to the everyday person in his care.

He became a Deacon in the Anglican Church in 1953 in the Diocese of St Arnaud and Priested in 1954 he first served in Mildura under a hard taskmaster before going to Sea Lake then Charlton holding various posts along the way as Director of Youth and Examining Chaplain for the diocese. From 1964 he came to Melbourne, to Cheltenham 1964-70, and then St Georges Malvern 1970 -85, serving as an Industrial Chaplain and as Archdeacon. There were many committees and organisations he had responsibility for. Those who knew him were delighted that some recognition as given to this remarkable man with his Order of Australia Medal. In 1985 he concluded his active Ministry at East Frankston, retiring as Archdeacon Emeritus in 1995.

Despite a seemingly casual and sometimes gruff manner, George was very hard working, caring, highly intelligent and very well read. If he heard of a new idea he would want to pursue it. He understood the full implications of life as a priest. If he sensed some distress in a person – he pursued it to give real comfort. Yet despite all this he managed to be a good husband , father , grandfather and great grandfather – he so loved his beloved Dorothy and his family. He was so proud of them. George enjoyed his family, he also enjoyed good food and wine. He was great company. Above all he remained a great priest who brought Christ to the lives of many. George was proud of his schooling at Melbourne High.